Playlists are a fantastic YouTube feature, and one that a lot of video marketers ignore – probably because they don’t understand what benefit they can get from them.

For those who don’t know, playlists are a way of grouping together similar, or related videos so that they can be watched one after another. You’ve probably come across them on YouTube before – the look a bit like this.

The Benefits of Using Playlists

We’ve mentioned before about watch time as a factor for YouTube’s ranking algorithm. This basically means that YouTube takes into account not just the length of time people have been watching your video, but also how long their whole viewing session on YouTube is once they have watched your video.

It’s easy to see then, that a playlist that lets a person sit back and watch video after video without having to do anything will increase the likelihood that they’ll watch more of each video, and also the amount of time they will spend on the site in total.

This means that your videos and your playlist will be looked upon favourably by YouTube’s watch time algorithm. 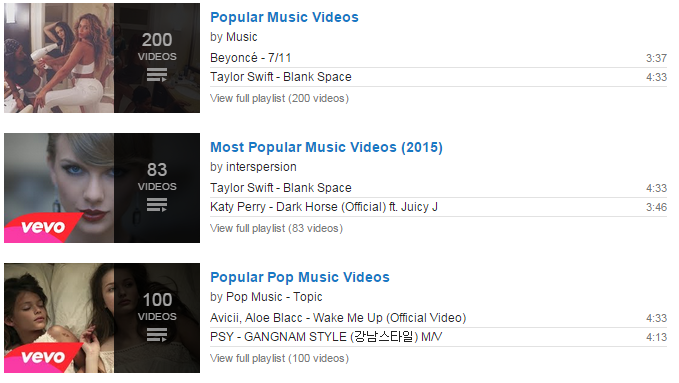 Because playlists appear as separate entities, they also help you rank for keywords you may not be targeting with individual videos.

For example, if you have videos on “how to set up a YouTube account” and “how to brand videos”, then you could create a “video marketing” playlist to target a new keyword without even having to create a new video.

There is no restriction on which videos you can put in a playlist, they can be yours, someone else’s, or a mix of both.

This means that you can mix in popular videos that belong to you or other people with some of your own which haven’t gotten as much love therefore upping the view count and watch time of the videos that need it.

How To Create a Playlist

So, how do you actually create a playlist to get these benefits? Well, as you can expect from YouTube it is really simple, and there are a few ways of doing it. I’ve made a quick video below to take you through one way to create playlists for those who haven’t tried it yet.

How to Optimise & Promote Your Playlist

Now you’ve got your beautifully crafted playlist you’ll want to make sure it’s set up to make the most of it.

This is something that most of the time shouldn’t be needed. However, if the playlist needs a bit of context then you should create a small intro video that quickly lets people know the point of the playlist without boring them so they go away.

Also YouTube currently only lets you choose the thumbnail of one of the playlist’s videos to be the thumbnail for the whole playlist. So, if you don’t like any of the thumbnails of the videos, you can upload an intro with a custom thumbnail that you like.

2. Only Select The Relevant Parts

There’s a good feature for playlists that allows you to choose the start and end points for a video in a playlist.

This is useful if a lot of videos have similar beginnings or ends that should be cut so people don’t watch them again and again.

Also if there is just a small part of a video that fits into the playlist then it should be only this that appears in the playlist to stop people from getting bored. The last thing you want is people leaving your playlist.

Optimising the metadata is similar to how you would optimise a single video, except there is less to optimise. You need to create a catchy title and description for your playlist which contain the keywords you want to target.

The playlist’s thumbnail should be something which is likely to attract clicks while still being relevant.

Finally you can promote your playlist in a similar way to promoting a normal video, by sharing it on your social profiles, putting it on your channel page, and allowing comments.

In addition to this you should also keep the playlist updated as every time you add a video to the playlist it will show up in your feed, giving it more exposure.

Now you know the benefits of using YouTube playlists you can start unleashing the power of this underused tactic.

Leave a reply Click here to cancel the reply