Warning: Parameter 2 to WPE\Site_Preview::the_posts() expected to be a reference, value given in /home/storage8/public_html/replayscience.com/wp-includes/class-wp-hook.php on line 287
 3 Reasons You Don't Want a Viral Video - Replay Science

Everyone loves the idea of a viral video. Your business suddenly gets in front of thousands, if not millions of people. And all of this for a fraction of the cost of traditional marketing practices.

So it makes sense that when marketing your video the gold standard is it going viral right? 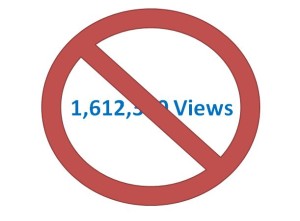 You Shouldn’t Care About Views

The entire point of a viral video is to get the most views. Not to get sales, nor qualified leads. Not to help customers, nor create a positive brand image. The point is to get views of that video; a metric which has nothing to do with your company.

The only way for the video to get huge numbers of views is for it to reach a very wide audience. An audience which is going to be completely irrelevant for most companies. Does your local bakery care that a 13 year old boy 2000 miles away saw your video? Because most of the time they shouldn’t.

As we have mentioned before, you need to know what the objective is for your video, and that involves knowing who the audience is, and what you want them to do or take away from the video. For that to work, you can’t make it play to the widest possible audience.

You Aren’t Going to Go Viral

For your video to go viral requires a huge amount of luck, a few tweets from famous people and for good measure the right mix of bacon, zombies, and cats.

Which brings us on to the next point.

A Viral Video is Not Relevant to You

People love to share videos which make them laugh, shock them or inspire them. Which is why a sneezing baby panda has more views than your company’s video ever will.

You might be thinking “I can create a video which will inspire or amuse people without having to resort to cheap tricks”. You would be completely right. But not if you brand it. People don’t want to watch and share adverts. So unless you create branding or product placement so subtle that it’s easily missed, people won’t want to share it.

So many people fail at creating viral videos because they have their logo placed throughout the video or they keep mentioning their brand. This resorts in a catch-22 for viral videos. If you brand your video too heavily then people won’t want to share it. If you barely brand it at all then you won’t get any benefit from the video. This happened recently with the viral video “First Kiss”which was produced for the LA based clothing company WREN – the film contained so little branding that most people who see the video don’t even notice.

While viral videos might work for a small percentage of companies they certainly aren’t right for most. You are much better off creating a relevant video that only reaches an audience of hundreds but converts a high percentage of those into qualified relevant leads.


Warning: Parameter 2 to WPE\Site_Preview::the_posts() expected to be a reference, value given in /home/storage8/public_html/replayscience.com/wp-includes/class-wp-hook.php on line 287

Leave a reply Click here to cancel the reply